On the outside, Mac OS X looks beautiful. No wonder a lot of people want to run it.

Mid-August 2005, crackers from the OSx86 Project take a version of Mac OS X already installed on a physical hard drive, copy it into a virtual hard drive, modify it to run in a VMware virtual machine, and distribute it on the Internet, hence allowing unscrupulous individuals to run what they claim is Mac OS X on any PC with VMware software.

In the following days, they refine the process: they take the Apple install DVD for Mac OS X, copy it into an ISO image, modify it to run on any PC, distribute it on the Internet, allowing unscrupulous individuals to run what they claim is Mac OS X on any PC.

But is it really Mac OS X these people are running? Of course not. It is an illegal modification and distribution of Apple's copyrighted work. It is dubbed a hackintosh.

Fast forward to the end of October 2007: Apple releases Mac OS X Server 10.5, and change its licensing terms, allowing it to be run inside a virtual machine, as long as the physical hardware is an Apple-labeled computer.

From that point on, things happen very fast. I have been primarily working on that in the last seven weeks, and it was quite stressing :)

End of December 2007, Alex Graf demonstrates at 24C3 QEMU running Mac OS X. This is true virtualization (it is running the unmodified OS), so this is promising, but quite a few things do not work:

On Jan 9th 2008, Parallels announces that they can run Mac OS X Server in a private beta version of their software. They subsequently demonstrate that capability at Macworld. They do not publicize the extent of their virtual hardware support, but various sources report that, like QEMU, they fail to install Mac OS from the Apple factory-sealed DVD.

On Jan 14th 2008, VMware announces and demonstrate at Macworld that they can, in a Technology Preview version of VMware Fusion: 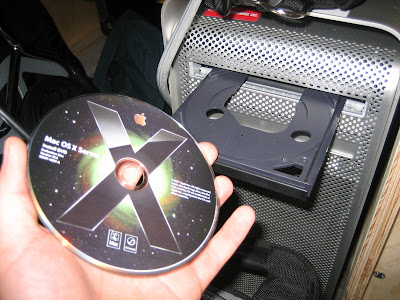 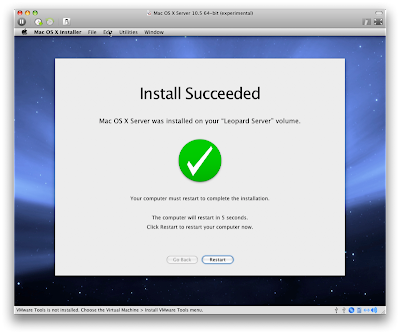