The reception of our VMware Fusion for Mac beta has been unbelievable!

Ben's blog entry describes it better than I ever could.

Today I have worked towards solving the issues 3 and 4 he mentions. Issue 4 turned out to be an Apple bug.

You guys, Mac lovers, have no life! You should be in the middle of preparing your end-of-the-year celebrations instead of trying out VMware virtual machines on the Mac! Well, I plea guilty too: I spent the rest of the day thanking you for your feedback and responding to it.
Headless virtual machines in Fusion? Check!
One of you was complaining about the fact that Fusion didn't have all the new and nifty features of VMware Workstation 6, in particular the ability to run a virtual machine headless, a typical use scenario if your virtual machine runs a bunch of server processes, for example if it is a virtual appliance.

Well, it turns out that we did build that feature in Fusion, but it is kind of indirectly exposed. We have confidence in our user interface code, but as the saying goes:

No program is completely bug-free until the last user dies.

We knew you guys would push the Fusion user interface and potentially crash it. When that happens, you gentle user are annoyed, and we developers are embarrassed. The last thing we want in that case is to also lose whatever you were doing in your virtual machines.

The corollary feature is that if you want to start a virtual machine headless in Fusion, all you have to do is open it up in the user interface, then go to the Apple menu and select the "Force Quit..." item.

This is the design philosophy we have adopted everywhere for Fusion:

Exactly 1 year ago, after having spent 7 years at VMware, I wanted to do something new. My manager was nice enough to let me be the technical lead of the Advanced Project I submitted: porting our hosted virtualization engine to Mac OS. I cherry picked a surgical team of VMware engineers, some of them experts with the VMware code base, some of them expert Mac users.

4 months later, we had our first VMware virtual machine running on Mac OS, with a GTK+ user interface (borrowed from the Workstation product for Linux) running on top of X window. Management and marketing liked what they saw, and asked us to productize this. I came up with a codename for the project: Fusion.

Over the next 8 months, we hired a Mac user interface person. We thought Mac users would not settle for less than a Mac native look-and-feel, so we rewrote the user interface in Cocoa. We completed the VMware platform to make it as rock solid as it is on Windows and Linux.

We publicly demonstrated an alpha version of Fusion at Apple WWDC 2006. Hundreds of people left the convention center to see it in a nearby hotel suite. 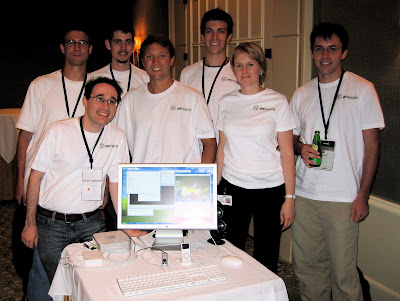 The Fusion team at Apple WWDC 2006. I'm in the upper-left corner.

We publicly demonstrated it again on our booth at VMworld 2006. 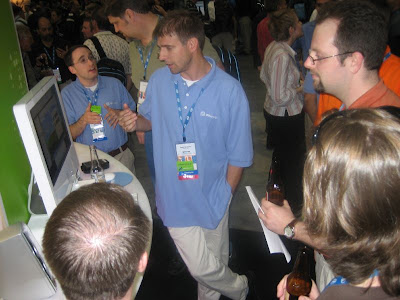 If you were not one of our 7 000 attendees, you can watch the video of a fellow blogger who taped me. I wish I was this thin, but it is just the video's aspect ratio that is weird!

Today, we announced our first public beta version of Fusion. This is VMware's early Christmas gift to the Mac community. I can finally explain to my Mac friends what I work on every day, and what the VMware buzz is all about!

Just to give you an idea of how badly people want Fusion, about 2 100 persons petitioned for it and 70 000 people registered on our website to be notified when they could start downloading it.

You can download and use this beta version of Fusion for free. Please register on our discussion forum and give us your feedback. We are listening. But keep in mind that it is a beta, not the final product we will deliver:
Today, I'm also writing my first blog entry ever. I'm planning to keep them coming, on the topics of Fusion, Mac OS internals, and virtualization in general.

Yes, today was a good day.

Oh by the way, we are hiring big time, as we have been doing for 8 years. If you think you know Mac OS or Cocoa inside out, and you want to work on exciting and challenging projects that change the way people use computers, drop me a comment.
Posted by Regis "HPReg" Duchesne at 7:45 PM 208 comments: