In January 2006, I started porting the VMware hosted virtualization engine to Mac OS X by myself. I had never touched an Apple computer before.

A year and a half later, we have built a world-class team of Mac engineers, and on behalf of the team I'm happy to announce the general availability of VMware Fusion 1.0.

It has been quite an adventure, with its share of frustrations and nights of sleep deprivation, but there is nothing like user satisfaction to make you forget about it. The fine folks over at MacInTouch certainly seem to enjoy it:

we're quite impressed with Fusion. Windows integration is excellent, and the fact that Linux has VMware Tools integration at all is fantastic — not to mention support for less common OS's
[...]
Fusion is an outstanding first release for the Mac that builds on the company's long history of virtualization.
[...]
the development team focusses on stability and reliability.
[...]
VMware appears to be rock solid. The user interface is polished, attractive and well thought out, and the setup assistant makes it fast and easy to set up a usable Windows environment. Fusion makes Windows behave as close to a Mac as is reasonably possible — and that's really quite something.

Effective now, you can order from
By mid-August, you will also be able to buy the Fusion box at any of these stores: Apple retail stores, Fry's, Office Depot, Staples, CompUSA, Best Buy, Buy.com, Microcenter, ...

In his blog, Srinivas gives more info about the design of the box. 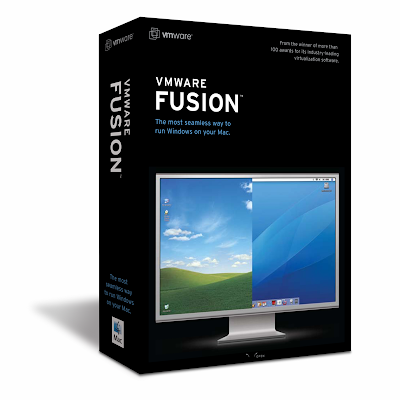 Posted by Regis "HPReg" Duchesne at 8:32 PM No comments:

Buy one, get half of one free

"The Kingmaker: Walt Mossberg makes or breaks products from his pundit perch at a little rag called The Wall Street Journal", Wired, May, 2004.

I've been testing Fusion, and I've found it works well. [...] Fusion is allowing me to simultaneously run several popular Windows programs -- Microsoft Outlook, Windows Media Player and Internet Explorer. Each is running in its own window, just as if it were a native Mac program. I can switch from one to the other rapidly and smoothly. Their icons show up on the Mac's "Dock," just like the icons for Mac programs.

Hurry up! Time is running out to buy VMware Fusion at $ 40! Really soon, it will only be available at its normal $ 80 retail price! Consider yourself warned... :)
Posted by Regis "HPReg" Duchesne at 11:54 PM 29 comments: